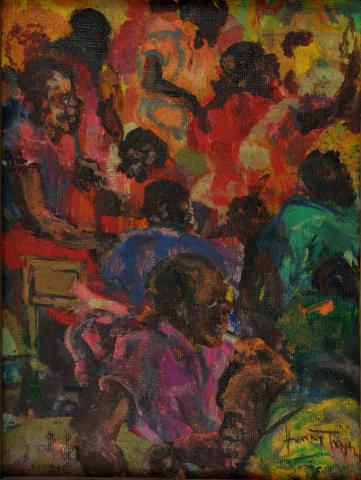 Interior scene including many figures. The artist has used vibrant colours and a cropped composition; the figures are depicted in close-up, which gives the viewer the sense that they are inside the scene.

"Henry Tayali was a respected artist both home and abroad, and this painting lays bare his talents. The composition is packed with colourfully dressed, androgynous figures evenly spread across the canvas. Despite varying gestures and expressions, the figures are virtually indiscernible from one another. The uniformity of these figures anchors the painting, the placement of arms and of bodies lead the eye naturally down the canvas, zig-zagging around figures on extreme ends of the canvas on the way to the large figure at the bottom-centre. Tayali’s loose brushwork contributes to this, it blends the characters depicted into the background. This removes the illusion of depth, but the figures reduce in size as they ascend the canvas, which maintains the illusion of spatial recession.

Zambian artist and curator Zenzele Chulu, from the Visual Arts Council Documentation Department, interpreted this painting as a melancholic expression of the everyday labour endured by his compatriots. Chulu described the figures here, perhaps gathered in a Lusakan bar or on a busy urban street, as ‘eager to escape poverty’ and as looking beyond the frame to those with influence and power. Such a reading, in fact, seems to jar with the vibrant, colourful energy within the work, but Chulu maintains that Tayali was an artist who was always true to his ‘philosophy of revealing the day to day suffering of ordinary people’."

Henry Nkole Tayali (born Zambia, 1943 -1987) created paintings, sculptures and prints. As president of the International Association of Artists in Zambia, he had a pivotal role in the cultural and artistic development in Zambia, and worked tirelessly to raise the profile of indigenous African arts and crafts.

"Henry Tayali was born in Serenje, Zambia on the 22nd of November 1943. He held his first exhibition when he was fifteen. He was educated at the Margaret Trowell School of Fine Arts in Makerere College (Now Makerere University) in Uganda, an art school renowned for the artists it has produced. He studied further in Dusseldorf Art College after which he returned to Zambia as a lecturer and on African Art and University artist for the Institute of African Studies in Lusaka, Zambia.

He was later appointed President of the International Association of Artists in Zambia under UNESCO, head of the Art Centre Foundation, the National Craft Council of Zambia, and the National Museums Board in Zambia. The creation of his work coincides with a period of repression and autocracy in the region under President Kenneth Kaunda. It is therefore unsurprising that his work addressed the political and social tensions in post-colonial Zambia.

Henry Tayali is widely considered the foremost Zambian artist recognized in the international art scene. He died on the 22 July 1987 in Aachen, Germany."