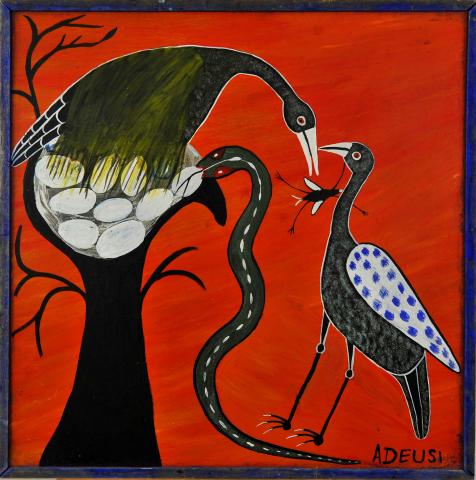 The painting depicts two birds feeding on an insect while a snake attempts to steal eggs from their nest. One of the birds stands on the snake's tail. It is painted using flat, opaque, highly saturated colour.

"Mandu Mmatambwe Adeusi was a Tanzanian artist who practiced a style of painting known as Tingatinga that developed in the later 1960s in urban workshops in Dar es Salaam and Zanzibar. Tingatinga painting was founded in the 1960s by Edward Saidi Tingatinga, and was characterized by square compositions that typically featured animals, birds, rural settlements and folk stories. These were painted in vibrant blocks of bicycle or house paint, which left a smooth, slick surface. Adeusi was a friend of Tingatinga and his wife, who was a member of the Makonde people.

In accordance with Tingatinga, this work features a square composition with a red background executed in industrial bicycle paint. However, unlike other examples of Tingatinga painting, Adeusi’s background is not a single colour and contains strokes of orange. In the foreground, two birds feed on an insect while a snake attempts to steal eggs from their nest. One of the birds stands on the snake’s tail. The animals are stylised as is the tree that holds the nest of eggs. It is possible that this work could illustrate a folk tale.

We do not know exactly when Mitchison purchased this work, but we know she visited Dar es Salaam in both the late 1960s and the early 1970s. The Argyll Collection records show that in 1971-3 unnamed ‘Paintings from African Street Painters’ were added to the collection and given that Tingatinga was considered an urban, street art practice it is plausible that this painting was amongst those acquired at this time."

Mandu Mmatambwe Adeusi (born Tanzania, c.1914- c.1984) was one of the first generation of the Tingatinga School of painters. .

"Mandu Mmatambwe Adeusi was born a member of the Makonde people in Tanzania around 1914. In 1971 he moved to Dar es Salaam to be trained by Edward Saidi Tingatinga. Tingatinga was an active artist for four years before he was tragically killed in 1972. Adeusi met Tingatinga through his wife, who was also Makonde."