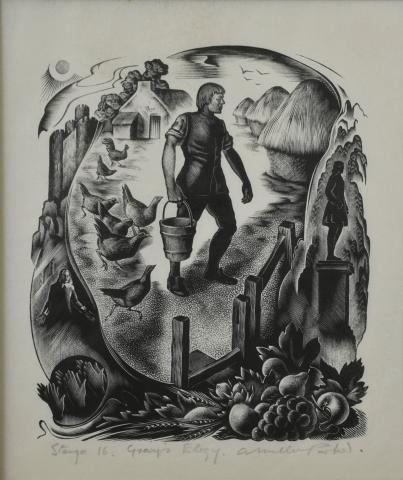 Illustration for Thomas Gray s Elegy Written in a Country Churchyard , based on stanza 16. Parker s monochromatic wood engraving depicts a central figure of a man. The man is standing in a farmyard, holding a wooden pail, followed by several chickens, with a steading to his right and haystacks to his left. Surrounding the scene are several smaller illustrations including a castle, a figure with outstretched arms, clapping hands and a mounted statue.

Agnes Miller Parker (born Irvine, 1895- 1980) studied and taught at Glasgow School of Art. She was known for her draughtsmanship and skillful sense of design. In the early 1930s she became well-known for her distinctive woodcut illustrations produced for the Gregynog Press in Wales. Her illustrations for Aesop s Fables were particularly celebrated, as were her sets of engravings for several Thomas Hardy novels made on the 1950s.