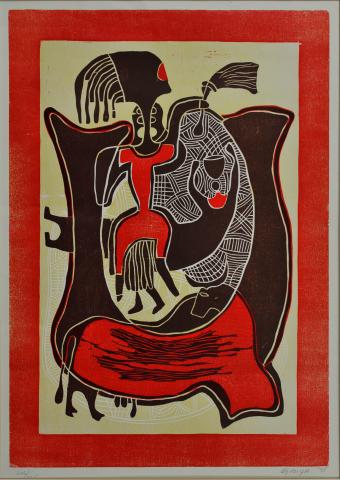 "Lucky Sibiya was a South African artist who apprenticed under Cecil Skotnes, one of South Africa’s foremost artists and the head of the Polly Street Art Centre in Johannesburg in the 1960s. Under Skotnes, Sibiya perfected his woodcut style, which can be seen in this work. Delicate lines bind together traditional Zulu imagery and Sibiya’s own abstracted forms.

Like most of Sibiya’s pieces, this print features a central figure surrounded by abstracted forms, another figure and a bull. Sibiya balances rich red, brown and ochre hues throughout the composition to create a rhythm that permeates the woodcut. While most sources identify this print as a woodcut, certain aspects of the work, such as the textured effect on the hide of the bull, suggest that this work may be a linocut. Regardless, such a complex multi-coloured print such as this would have required the layering of multiple prints on to the same surface in order to achieve this effect.

This woodcut, printed in 1975, is the first in a portfolio of fifteen woodcuts titled uMabatha, created to illustrate a play of the same name written in 1970 by the South African writer Welcome Msomi. The uMabatha portfolio is one of Sibiya’s most recognized works. The play is an adaptation of Shakespeare’s Macbeth, which Msomi uses the structure and narrative of to dramatise Zulu culture and history of the early nineteenth century. This print, executed in 1975, depicts the Sangomas welcoming the protagonist, Mabatha (Msomi’a Macbeth). The Sangomas are traditional healers, and Msomi’s interpretation of Shakespeare’s three witches. It is interesting to note that Sibiya’s father was a sangoma, or Zulu traditional healer, and would use bones and other artefacts in the diagnosis and consultation of his patients. Therefore, this work has both a personal significance and wider resonance in Zulu culture.

Given Mitchison’s interest in emphasizing linkages between Highland Scotland and the African continent, it is clear why this work from the ‘Zulu Macbeth’ could have attracted her. She purchased this print from an exhibition at an unnamed gallery of the whole series held in late October through early November 1976. The exhibition featured Lucky Sibya’s work alongside that of the sculptor Lucas Sithole. In the exhibition flyer, Sibiya is described as ‘one of South Africa’s foremost Black artists.’"

Lucky Sibiya (born South Africa, 1942-1999) produced woodcuts and sculptures that have made a significant contribution to South African modern art.

"Lucky Sibiya was born in Vryheid, South Africa in 1942. He continued to live and work in South Africa for the remainder of his life, producing woodcuts and sculptures that have made a significant contribution to South African modern art.

Ancient Zulu traditions and rites of passage were frequent topics of Sibiya’s works. His father was a sangoma, or Zulu healer, and would use bones and other artefacts in divining and diagnostic processes. Sibiya was fascinated by the abstract forms of these items, which would later influence his own art production. Much later in his career, Sibiya would begin to incorporate found objects or ‘the detritus of the urban world’ into his works (Peffe-Engels 1999).

At the age of eleven, Sibiya and his family moved to Sophiatown, a mixed-race suburb in Johannesburg. Following the Group Areas Act established under Apartheid, Sibiya and his family were forced to relocate to Soweto. Sibiya was sent to St Peter’s Seminary where he was taught calabash engraving (Peffe-Engels 1999). Toward the end of his studies in the 1960s, Sibiya sought out Cecil Skotnes, one of South Africa’s foremost contemporary artists at the time and the head of the Polly Street Art Centre in Johannesburg.

In the 1970s, Sibiya began to exhibit at several major galleries in Johannesburg including Gallery 101, Maghelli Gallery, and Everard Read Gallery as well as the Natal Society of the Arts in Durban. In 1974, he visited Europe and the United States where he exhibited his work. Today, his work is included in all major collections of South African contemporary art and collections abroad. Following his sudden death in 1999, he was honoured with a retrospective exhibition at the UNISA Art Gallery in Pretoria."