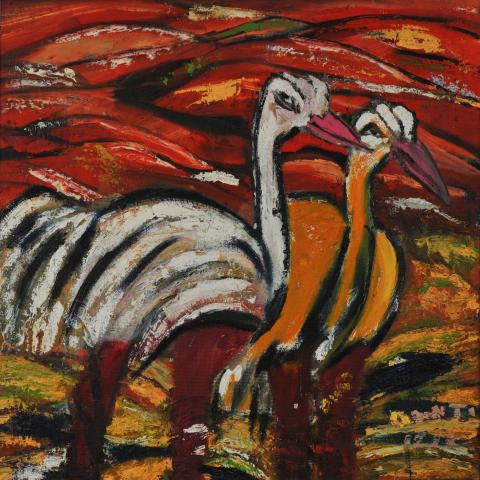 "Hezbon Owiti was a renowned Kenyan artist who trained in Nigeria and New York and was best known for his densely coloured prints and paintings. This painting, Ostriches, depicts two birds placed in a colourful abstract landscape. The animals are easily identified and clearly recognizable, yet here is not a single feather and the application of paint is very liberal and loose, the paint has been applied in thick layers all over the canvas. The result is a textured and three-dimensional surface, which adds to the impact of the painting. The ostriches are in the direct foreground, disturbing the illusion of pictorial space and perspective. Owiti uses the contrast between the deep reds and white paints to convey depth and place the undulating red forms in the background. The palette is fairly limited to warmer tones, but the composition is bold and bright.

It is not currently clear if Ostriches possessed any specific symbolic or personal meaning to the artist, however Owiti was deeply interested in depicting animals, and in their potential as provocative metaphors (Owiti 1969). Letters in the Argyll Collection reveal that this work was part of a major solo exhibition of Owiti’s work at the renowned Chemchemi Creative Center in Nairobi. Alongside Ostriches, that exhibition showed over 40 other drawings, paintings and ink works, including a series of portraits of some African independence leaders and heads of state (Jomo Kenyatta, Juliua Nyerere and Haile Selassie). Owiti’s commitment to colonial independence and black liberation was also clear in two works entitled ‘Slave Trade I’ and ‘Slave Trade II.’ The first work was marked as ‘donated to the campaign for the release of South African political prisoners.’ Though Ostriches may not share the overt political content of these works, the bold and expressive handling of the paint here suggests a confidence in experimenting with form, and with the boundaries between realism and abstraction."

"Little is known about Hezbon Owiti’s life and persona. He was born in Nyanza, Kenya in 1946. He was educated at the University of Ibadan, Lagos in 1965, later taking up a scholarship with the Farfield Foundation in New York. His work has been shown in various art institutions and conventions around the world including the Krakow Biennale (1970), the Camden Art Center (1968), and various exhibitions in Africa (Oshogbo, Nigeria; Dar es Salaam, Tanzania; Nairobi, Kenya). He undertook a residence program at the University of Sussex, and has been featured in notable publications such as African Arts magazine and Contemporary Art in Africa by Ulli Beier."