Bicycle Paint on Board 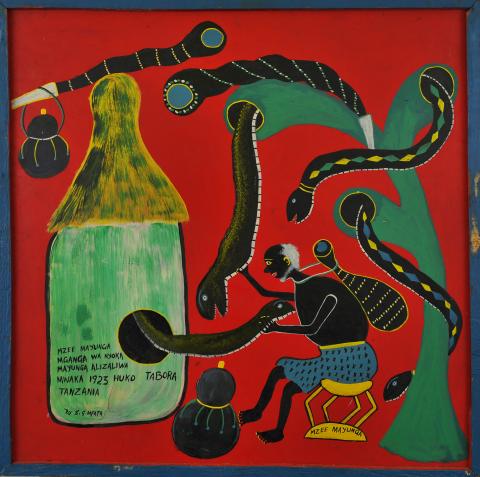 The painting depicts a white-haired, bearded man, surrounded by snakes. He is sitting on a yellow stool under a green tree, against a red background.

"Faithfully following the Tingatinga style, Simon Mpata has created a work with all of its defining characteristics: a square composition executed with industrial bicycle paint on board, a richly concentrated palette of reds, blues, greens and yellows, and a narrative driven by animals.

Tingatinga painting was founded in Tanzania the 1960s by Mpata’s half-brother, Edward Saidi Tingatinga. Mpata was known to be the most faithful follower of his brother’s style.

The work features a stylized white-haired man seated on a stool labelled ‘Mzee Mayunga,’ loosely meaning ‘Elder’ in Swahili. He grabs at two snakes that lunge from a tree and a nearby building while several other snakes slither around a green tree behind him. The text on the tree trunk loosely translates to ‘The Snake Healer was born in Tabora, Tanzania in 1923.’ This suggests that the white-haired figure depicted in the work may be a portrait of a specific Elder.

Like Mandu Adeusi’s work, it is possible that this painting was one of the ‘Paintings from African Street Painters’ added to the collection between 1971 and 1973."

"Simon George Mpata (also spelled Mapata) was born in 1942 in Tanzania and is the youngest half-brother of Edward Saidi Tingatinga. E. S. Tingatinga was an active artist for four years before he was tragically killed in 1972.

Before his untimely death, Tingatinga amassed several followers, including Mpata, who adopted their teacher’s simplified and stylized square compositions of animals and people. Mpata was a devoted brother and the most faithful to the Tingatinga style out of all of his E. S. Tingatinga’s followers.

After his brother’s death, Mpata moved to Nairobi, Kenya where he opened his own studio. He began exhibiting with Gallery Watatu. During this time, a Japanese magazine editor visiting Nairobi encountered Mpata’s work and became an advocate of his work in Japan and elsewhere abroad. There is now a safari club bearing Mpata’s name and a building built in his memory designed by Edward Sazuki in Japan.