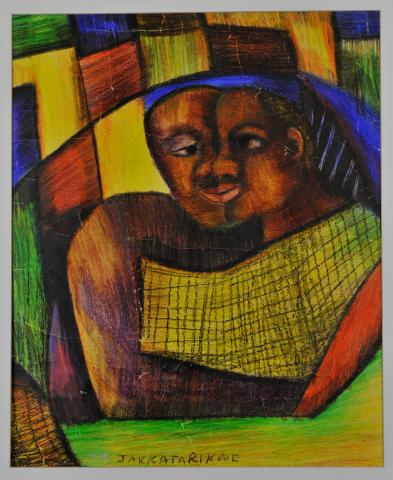 Drawing of two figures, which appear conjoined in the face, embracing on a colourful patchwork background.

"Jak Katarikawe was a self-taught artist who took inspiration from his daily lived experience as well as his dreams. This wax crayon work on paper depicts two figures locked in an embrace against a background of colour-blocked squares. The bright concentrated colours and black outlines that permeate this work are characteristic of Katarikawe’s wax crayon works, which were first exhibited in Kampala in 1967. It is certainly plausible that Mitchison saw this work at that exhibition, when Katarikawe was still working largely as a taxi driver and chauffeur. This drawing exhibits a sophisticated blending of wax crayons, creating tonal variety in the figures’ skin and the patchwork behind them. The artist is known to have preferred this medium to oil painting, most likely because of its low cost (Beidelman 2003).

In-keeping with Katarikawe’s interest in sexuality, these figures are depicted sharing an intimate moment, suggested by the heavily-lidded eyes of the left figure and the emphasis placed on the closeness of the two figures’ bodies. One figure is shown facing-forward, with only half of their face visible while the other is depicted in profile. When looked at as a whole, each exposed half of the figure’s faces seem to mirror each other to create one face, further underscoring their entwined intimacy. Their lips, locked in a kiss, almost appear to create a complete mouth, upturned in a smile as the two figures meld into one.

Katarikawe’s talents were first noted by David Cook, Professor of Literature at Makerere College in Kampala, Uganda, who gave him access to the college’s art department. In addition to being unable to read or write and having never received a formal education, Katarikawe was dyslexic and frequently used varied spellings when signing his works (Court 2004). In this work, for example, the artist has signed his name ‘Jakkatarikwe.’"

"Jak Katarikawe was born in Kigezi, Uganda around 1940. He is often referred to as ‘Africa’s Chagall’ due to his use of colour and depiction of animals and villages inspired as much by his dreams as his reality (Court 2004).

Katarikawe was ‘discovered’ by David Cook, who was Professor of Literature at Makerere College in Kampala, Uganda between 1962 - 1977. Katarikawe, who had been Professor Cook’s chauffeur, was then introduced by his employer to another Makerere professor and artist, Sam Ntiro, who taught him the basics of painting (Court 2004).

In 1966, Katarikawe had his first solo exhibition at the Uganda National Theatre. The artist left Kampala for his hometown of Kigezi in 1978 due to violence and unrest in the region under Idi Amin’s administration. In 1981, he relocated to Nairobi, Kenya. Soon after, gallery owner Ruth Schaffner began representing him at Gallery Watatu. Katarikawe also held shows in the Paa-y-Paa gallery and the French Cultural Center and his work Wedding Dreamer was exhibited in the foyer of the Kenya National Museum.

Katarikawe’s works are as diverse in style as they are subject, often covering topics from landscape and Kiga traditions to Christian imagery and overtly sexual themes. Art historian Elsbeth Court describes the narratives of his works as ‘akin to soap operas,’ which undoubtedly contributed to their widespread popularity (Court 2004). His works have been reproduced on calendars, posters and used for health campaigns for family planning and HIV-AIDS and has become part of the urban Kenyan’s visual vernacular."