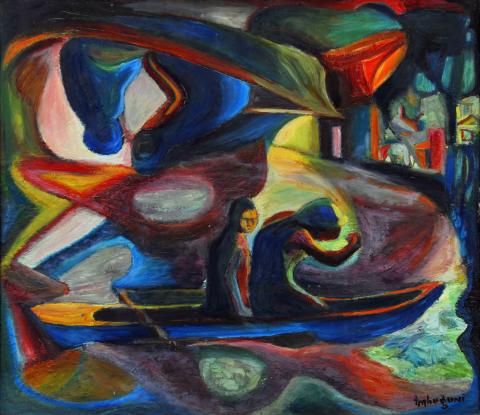 Dreamlike painting in vivid colour, with a strong emphasis on pattern. Two figures in a boat in a boat, one bowing its head, arm raised, and the other looking on. The figures and boat are mirrored in the water at the top of the painting.

"Louis Mbughuni was the Director of Arts and Language in the Ministry of Culture for Tanzania in the 1960s. Though not a professional artist, Mbughuni’s sophisticated dreamscape implies that he most likely had professional fine arts training.

This oil on board work depicts two figures in a boat with a mirrored image of the figures floating above. The two sets of figures, however, are not a perfect mirror image of one another. While one pair faces one another, the other face opposite directions: one figure sits facing the town in the top right hand corner of the composition and the other looks directly at the viewer. The richly coloured oil paints merge to create abstracted forms that anchor this dreamscape. Though the colours appear quite saturated in this image, they are much more muted and contribute to the overall eerie atmosphere of this work.

Though the title does not provide such information, it is very possible that what is depicted here is a nocturnal fishing scene on Lake Tanganyika. A historic fishing practice in the region involves men in wooden dug-out canoes hauling nets of tiny sardine-like fish called dagaa. The fish are caught at night, with small lamps used to attract shoals. Much like the importance of fishing to the communities of Argyll and Bute, dagaa fishing is a long-standing part of the life and economy of communities around Lake Taganyika. Though Mitchison described this in a letter as a ‘dream’ image, the potential for a sense of connection between two far removed, yet fishing-dependent communities was clearly evident.

Letters from Mitchison, as well as from Prof. Cecil Todd at Makerere College in Kampala, indicate that this work was purchased directly from Makerere in 1966, along with two other works. One is the etching by Catherine Nankya, still in The Argyll Collection, and the other was a large oil by an artist named Berlington Kaunda entitled ‘Village Market’ that Mitchison described as depicting a market scene with a mosque in the background, providing an insight into Uganda’s large Muslim population. The Kaunda work was never received in Scotland, and was presumed missing in transit."

"Louis Mbughuni was born in 1938, possibly in Tanzania. His name has also been recorded as Louis Mbuguni in various sources.

He was the Director of Arts and Language in the Ministry of Culture for Tanzania before attending the University of Indiana for higher education, graduating in 1973 (Askew 2003). He wrote his thesis on playwright Wole Soyinka. He later went on to teach at the University of Dar es Salaam in the theatre department until the 1990s (Plastow 1996).

He published five works, both books and articles, between 1974 and 1992. Mbughuni was a strong supporter of the socialist government of Tanzania’s Julius Nyerere and of the socialist principles expressed in the Arusha Declaration."