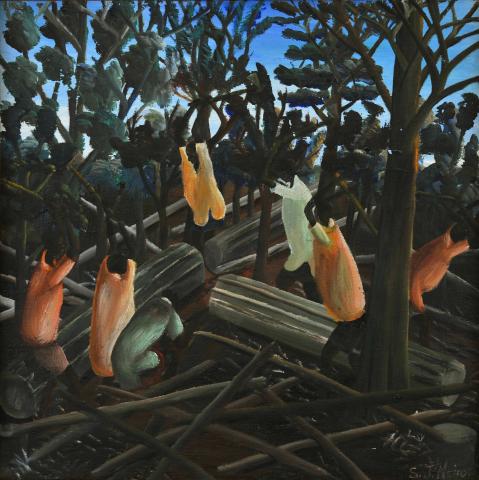 The painting depicts seven men, in the process of cutting wood, with their arms raised above their heads, holding axes. In the foreground are cut logs, lying criss-crossed on the ground. The men wear brightly coloured clothing which contrasts with the dark forest.

"This oil painting of men chopping wood is typical of Sam Ntiro’s work, which frequently depicted village life in accordance with the teachings of Margaret Trowell, his instructor at Makerere College in Kampala, Uganda where he received his training.

It is known that Ntiro focused upon scenes either from his childhood or his immediate surroundings, making it likely that this piece depicts either a village near Kampala or in the Kilimanjaro region of Tanganyika (present day Tanzania), where he was born.

Ntiro’s figures are stylized and flattened, blending into the composition and contributing to the overall pattern of the work. The painting is primarily composed of earth tones with occasional bursts of orange and yellow on the figures’ clothes or the brilliant blue sky visible through the trees. The figures’ arms, raised in the act of chopping wood, mimic the branches of the trees that surround them drawing the viewer’s attention to the rhythm of diagonals that permeate the canvas. The ageing of this work, visible through a partial cracking and flaking of the paint, reveals Ntiro’s method of painting blocks of color at a time beginning with the background and finishing with the figures in the foreground creating a dynamic and slightly raised painting surface.

Though some, like art historian Marshall Ward Mount, have considered Ntiro’s paintings ‘naïve,’ others like Angelo Kakande have hinted at possible political undertones in his works, pointing to his involvement with President Nyerere’s government and his socialist sympathies (Pisarra 2015). In 1961, Ntiro left Makerere College, where he had become a Professor of Painting, and accepted a post as First High Commissioner to the Court of Saint James in London for the then Republic of Tanganyika. Letters from Naomi Mitchison indicate that this work was purchased from Ntiro in 1967 and was one of the last of his works to be sold before he took a new position in Tanganyika’s socialist government as Commissioner of Culture, a position that prohibited extraneous commercial ventures."

Sam Joseph Ntiro (born Kilimanjaro, Tanzania, 1923-1993) studied at Makerere University and the Slade School of Art. His work has been exhibited internationally, and his work is held in a number of public collections. He has held a number of important public and teaching appointments including Lecturer and Head of Department, Makerere University; High Commissioner for Tanzania, London; Commissioner for Culture, Tanzania; Resident Artist and Associate Professor in Art, University of Dar es Salaam.

"Samuel Joseph Ntiro (1923 – 1993) was a Tanzanian artist and teacher who became the first High Commissioner to the Court of Saint James in London for the then Republic of Tanganyika and was later appointed Commissioner of Culture for the Tanzanian Government.

Ntiro was born in the Kilimanjaro region of Tanganyika to Lutheran parents and was educated in a Lutheran mission school (Pissara 2015). Ntiro’s religion and his people, the Chagga, feature heavily in his works. His pastoral scenes were encouraged by his teacher, Margaret Trowell at Makerere College in Kampala, Uganda (now Makerere University). Trowell encouraged her students to create what she considered to be ‘authentic’ modern African Art, but providing little to no instruction and allowing them to develop their own work. This approach was not appreciated by many of the students, who wished for a more engaged pedagogy (Trowell 1957). Ntiro attended Makerere from 1944 – 1947 where Trowell took notice of what she described as ‘distinctive colour and rhythm’ of his works. She singled him out to become a teacher at the college upon his graduation.

Ntiro taught painting at Makerere from 1948, later becoming Head of School until 1967 (Mount 1973). From 1952 – 1955 Ntiro furthered his education in United Kingdom attending the University of London, where he studied education, and the Slade School of Art. During this time, Ntiro showed his work at the Piccadilly Gallery where he sold over thirty works. He later received the Carnegie Travel Grant and spent ten weeks in the United States where he had a solo exhibition at the Merton Simpson Gallery in New York, becoming the first East African artist to have a solo exhibition abroad (Pissara 2015). Ntiro sold works to many prominent buyers during this exhibition including historian Dr. Horace Mann Bond and the Museum of Modern Art.

In 1961, Ntiro left Makerere and accepted an offer to become High Commissioner, a position he held for three years before teaching at the Kambuya Technical Institute in Kampala and the University of Dar es Salaam where he founded the Department of Music, Arts and Culture. He was then invited by President Nyerere to become Commissioner of Culture for the newly independent Tanzania."